Hello.
I am using TNG100-1 catalogues to compare dustless absolute (g,z) magnitudes and dusty absolute (g,z) magnitudes for three Subhalos at snap=33, with SubhaloID=1,8,21; the first galaxy has a consistent amount of stellar mass and gas; the second has less gas and the last galaxy, with SubhaloID=21, has no gas in its subhalo.
I want to specify that the dustless absolute mag is taken from the Subfind Subhalos catalogue and the dusty one from the SDSS Photometry catalogue.

Following the paper Nelson+19, I expected that comparing the dusty and the dustless magnitudes of the gasless galaxy (SubhaloID=21) the data points would overlap, since the dust content of a galaxy is derived from its gas content. In this plot, you can see that they don't overlap instead.

What do you think about the origin of this discrepancy? Thank you very much for the answer.

The dust model from Nelson+19 contains two components: "unresolved" dust, which accounts for very small-scale (i.e. HII region size) effects, particularly for younger stars, and "resolved" dust, which uses the gas distribution information from the simulation. So it is most likely this first component, which is always active, causing the difference with respect to the dust-free magnitudes. I include a snippet of the paper: 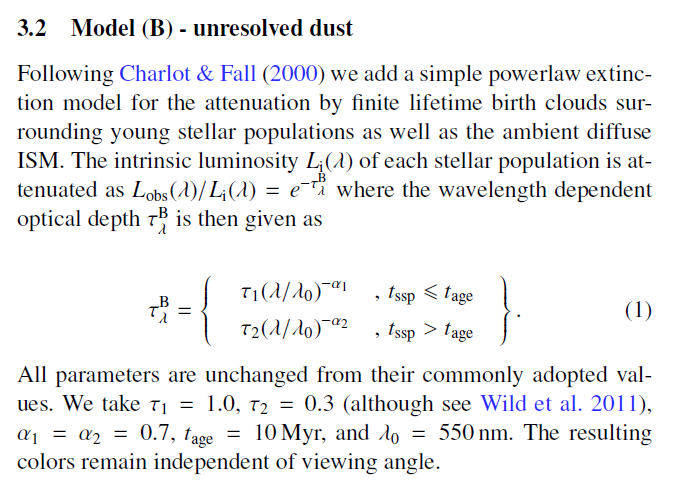 Ok, thank you.
Last question, in model (C) - resolved dust, you used only gas cells belonging to a particular subhalo (same SubhaloID for gas cells and star particles), or any gas cell in the neighbourhood (different)?

Oh, I'm sorry, I missed it before: what you call Zg and define "neutral hydrogen mass weighted gas metallicity" in the paper is substantially Mz/MHI and not GFM_Metallicity for PartType0, right ?