I'm trying to calculate the circularity of the subhaloes myself as by using the catalogs many of the values for z>0 are 0. I'm following up the procedure commented in the Data Access webpage that is based on the method followed up by Genel+15.

I first identify subhaloes with SubhaloMassInRadType > 3x10^8 solar masses and within the virial radius of their host Group_R_Crit200. Once I've identify them, I constrain to 2SubhaloHalfmassRadType[4] instead of 20SubhaloHalfmassRadType[4] (I guess in the catalogs is estimated within 20 times). The next step is to align the subhaloes by using the tensor of intertia, and finally, when I have the x,y,z axes aligned with the galactic plane, I calculate the angular momentum within 2SubhaloHalfmassRadType[4] by using the classical vectorial product, hence the third component is J_z = xv_y - y*v_x. According to the definition of circularity explained in the catalogs, they sorted the angular momentum by the binding energy and then calculate the circularity by comparing J_z for a given particle with its maximum angular momentum J_tot. In the figure attached I show an image with the calculated circularity for a given particle within the subhalo 96768. The green circle marks the J_z of the particle and the cyan one shows the maximum total angular momentum of the stellar particle at positions between 50 before and 50 after this particle. 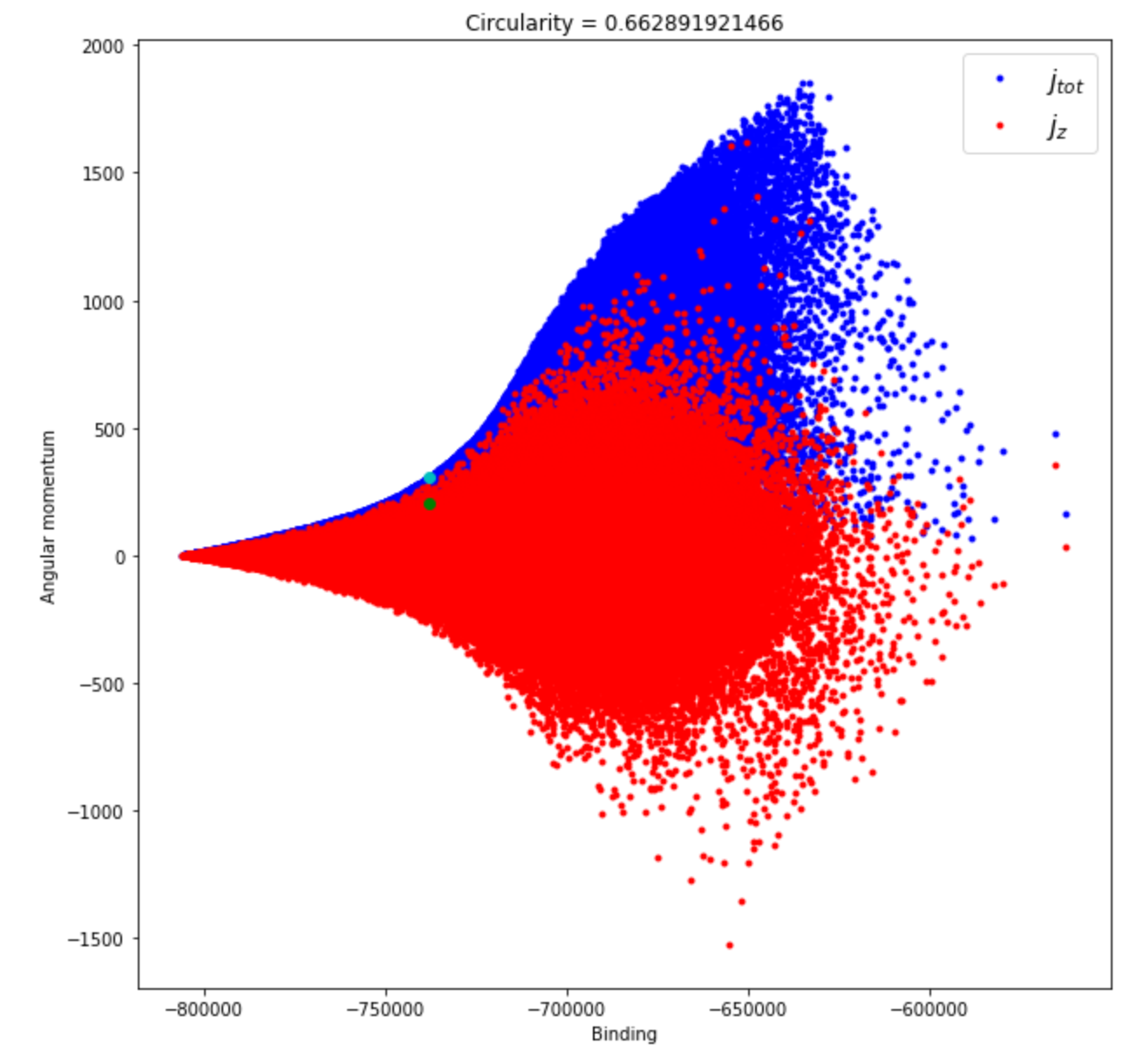 By using this procedure I'm getting plots like this one for the aforementioned subhalo, plotting either all the stars, and just the stars with circ > 0.7, and also the circularity distribution

However, for some other subhaloes like 96769, I get something very strange

Thanks in advance,
Pablo

It seems it could be a mis-centering issue, or something else minor. On the other hand, subhalo 96769 (assuming TNG100-1 at snapshot 99) is getting very close to the edge of the box (y-coordinate is near zero). Perhaps an issue with periodic boundary conditions?

well, it makes sense as I completely forgot about the periodic boundary conditions of the box... I need to fix this.

For now on I'm using the particle at the minimum potential (snapshot['Potential'].argmin()) to centre the subhalo instead of the centre of mass, and I'm utilising the velocity of that particle to also estimate the 'systemic' velocity of the subhalo, but probably this is not entirely correct. I'm not weighting the velocities by mass, but instead, I'm considering the values of the snapshot like they are, could it be also one of the issues? I'm not too sure if need to weight the velocities.

Thanks for your response,

The position of the minimum potential is also the definition we use for SubhaloPos, and this is good. However the velocity of a single particle could be quite noisy, it probably is not a good idea to use this as a velocity reference frame. You could use SubhaloVel, but this may be biased to larger distances. Ideally you would probably use the mean velocity of all stars within e.g. 2 * SubhaloHalfmassRadType[4], if that is your aperture of interest.

Mass-weighting or not is likely a minor issue, as all stars have roughly similar masses.

Alright, now I get much more consistent results, many thanks!